My first awareness of science fiction magazines, as distinct from science fiction in other forms (books and films), came about 1962, when I was a junior at San Diego State. For some reason I was exploring downtown San Diego , where I discovered a used magazine shop on Broadway Avenue . As I remember, it was called Lannings Bookstore. There I found a large assortment of old pulps, such as Startling Stories and Thrilling Wonder Stories from the late 40s and early 50s.
As with most college juniors, I did not have a whole lot of money to spend. Still, I managed to buy quite a few of those old issues. It was the start of a pretty large SF collection that now takes up a large amount of space. Ever since, I have been interested in science fiction and the arguably crude but undeniably colorful magazines that represented the genre’s main outlet for decades.
When I first got the idea, back in 2003, to start a science fiction magazine, I had no thought of creating anything other than a print magazine. The concept of an electronic “ezine” (or “webzine”) did not enter into my thoughts. I cannot now remember even whether I was particularly aware of the existence of webzines, though I suppose I must have had some vague idea of that category of publication.
Thank you for reading these stories and I hope that you will see also more editorial musings below. 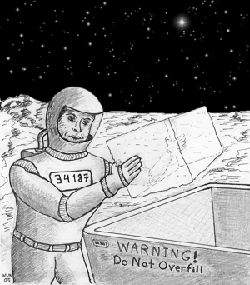 By Clinton Lawrence
You can hear the saws and jack hammers. Not like you would hear them out of a pressure suit, with air to carry the waves, but you can still hear the vibrations as they travel up your arms and legs. I cut a piece of ice off and tossed it into the little railroad car. 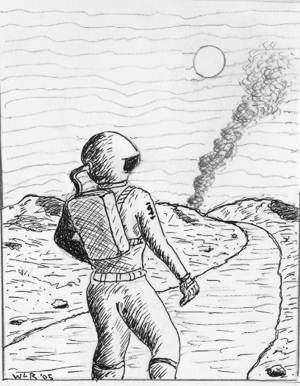 by Steve Antczak
Jorge remained calm and focused as he piloted the Rover along the Yellow Brick Road at moderate speed. Kien noted how well Jorge was keeping his cool. That was not really surprising, Jorge was, after all, a scientist, and he knew very well that the whole thing was partially his idea. There was no reason to panic and rush toward Bradbury at top speed as others were reported doing. Despite the surface calm that prevailed in the Rover, Kien could not resist another poke, another little dig. 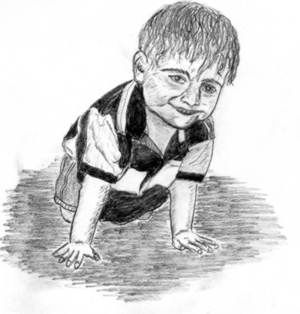 C is for Clear

By Michael Stone
A thick silence descended over the small tableau. Charity said to Andy, “Just run that one by me again, will you?” Tom the fat tomcat sidled out of the kitchen into the lounge. Andy wilted. “This bloke down the pub said they were all the rage across the Atlantic. That is, until somebody sued the manufacturers and put them out of business. 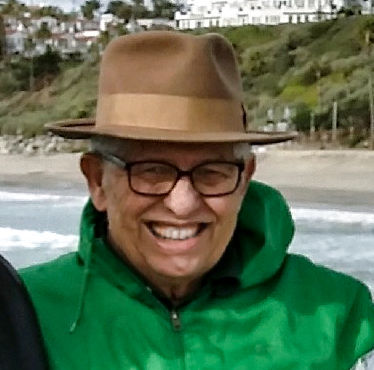